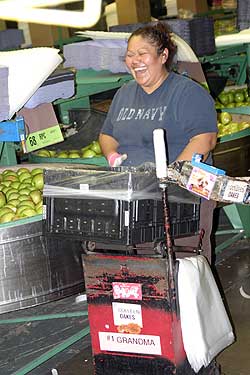 CRACK UP – Consulo Padilla is normally a fast apple packer for Gold Digger Apples, but teasing by her fellow workers as she posed for a picture led to a temporary break in the action as she got a case of the giggles. Padilla was packing for Gold Digger at

“We’re almost done with Fujis, we still have a few coming in from the Brewster and Omak area,” said Greg Moser last week. “All the rest of our varieties like red and golden delicious are already off the trees.”

Moser, who manages Gold Digger Apples Inc. in Oroville is optimistic about the returns members of the grower’s cooperative will see this year.

“We are having back-to-back years with a short crop in the state, which should mean back-to-back profit for the growers,” he said.

“The fruit quality is excellent… the size is a little down because of the heat it slowed growth somewhat, but overall harvest went well this year,” said Moser.

“It looks like a very nice crop and it came off well. The fruit is clean for the most part and it is packing out well, with lots of packs per bin,” he said. “The conversion is as good as I have seen it in years.”

Smith explains that the better the fruit the less that gets culled from the bins and the more “packs” into boxes that can be made from each bin.

Smith and Nelson growers have already completed their harvest. “We don’t really have any late varieties like Fujis and grannies, although we are growing some new varieties like Jazz and Pacific Rose,” said Smith.

Moser said his warehouse is seeing a 25 percent increase in tonnage this year, with apples coming in from as far away as Brewster. “With recent restructuring this is one of the strongest positions we’ve had in the last six years,” he said.

Moser said while harvest went pretty smoothly, there were times when labor to harvest the crop was hard to come by. “The overall labor shortage put us five to seven days behind, but we managed to get it all off the trees in time,” said Moser.

Smith, whose operation is smaller, said his growers did not have trouble getting labor. “We had enough labor, just not too much. We have cherries, pears and apples and we were able to spread out the work and keep the people busy enough that they didn’t leave the area. It wasn’t an abundance, just enough.”

While Smith and Nelson is concentrating on packing pears at the moment, Gold Digger is running two shifts, six days a week, packing apples.

Both Smith and Moser say other than a second short crop and good prices, this year’s harvest is much different than last when disaster in the form of hail struck much of the area’s fruit. They describe orchards that lost half their fruit to hail damage.

“It is a big change over last year. We had several orchards completely wiped out last year and some had as little as 50 percent of their fruit packed out,” said Smith, who says this year’s crop will be larger than last.

Several orchards experienced hail in the Oroville area as well, according to Moser, who estimated as much as half the crop was affected last year.

“So far the market looks like it has taken off from where it was at last year,” said Smith. “The crop from Wenatchee north is good, while the crop in the south of the state and the basin is less than a full crop. I’m hoping the prices will be like last year.”